Third Bridge over the Panama Canal

Published by Michael Flora On September 16, 2019 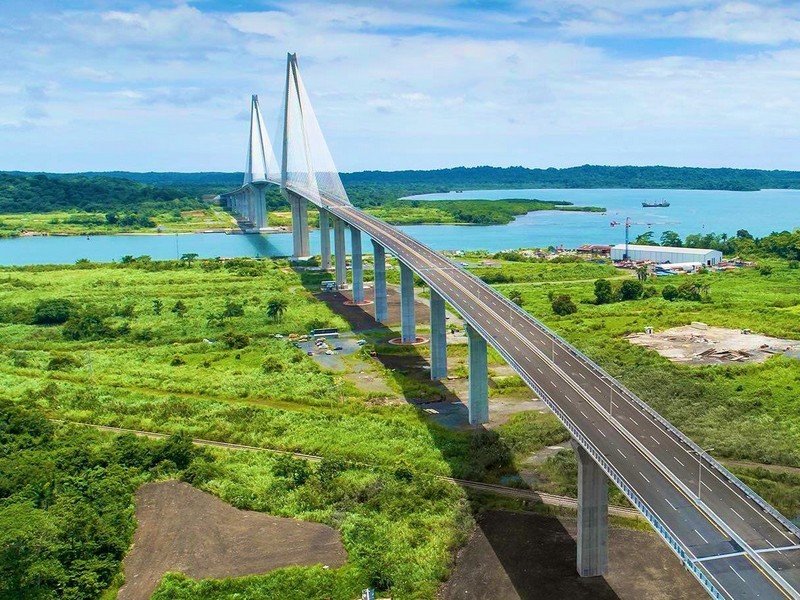 For Panamanians, August 2nd, 2019 has become another important date in the history of their country. On that day, the keenly-anticipated third bridge over the Panama Canal was finally inaugurated. Named the Atlantic Bridge, this magnificent architectural icon has finally provided the residents of this country with a permanent crossing that connects eastern and western parts of the Panama Canal. As yet another symbol of the country’s progress, the third bridge proves that Panamanian authorities listen to the voice of their residents and thus make relocating to Panama an interesting and tempting idea even for foreigners.

What was before the third bridge?

Logically, the construction of this bridge was preceded by that of two other bridges on the Panama Canal which span the Pacific entrance. The first one is known as The Bridge of the Americas since, as the name suggests, it connects South and North America.  It was completed back in 1962 and contributed immensely to the increase of road traffic over the canal at that time. Right until the second bridge was finally completed, this was a vital part of the Pan-American Highway.

The second bridge is called the Centennial Bridge and it is another permanent crossing over the canal that Panamanians use on a regular basis. It was built in 2004 to reduce the amount of heavy traffic on the Bridge of the Americas. Immediately, it became a new critical part of the Pan-American Highway. Since both these bridges are on the Pacific side of the canal, it was just a matter of time when the Atlantic side would get the same benefit. Luckily, the time has come. The third bridge, also named the Atlantic Bridge for understandable reasons, is here to help Panama continue its progress.

Some facts to know about the Atlantic Bridge

Panamanians proudly boast about this $380 million worth structure. Officially, the Atlantic Bridge is the largest concrete, cable-stayed, dual 2-lane roadway bridge in the world. The construction was suggested by the Panama Canal Authorities for the purpose of solving numerous problems passing over the Panama Canal used to cause. The China Communication Construction Company was trusted with the design. On the other hand,  a French construction firm by the name of VINCI Construction Grand Projets was in charge of all the works and the completion of this project. The bridge was built approximately 3km north of the Gatun and Aqua Clara locks, in the vicinity of the city of Colón.

When it comes to numbers, the length of this structure is 1,050 m. The central east-west span is 530 m long and it rests on two 212.5 m high pylons.  There are also two more spans on each side, each of them 230 m long.  One of the major benefits of the design of this bridge is a 75 meter-high vertical clearance which does not set an obstacle to the passage of even the biggest container ships.  Thus, it is expected that this project will promote new investments and eventually result in new improvements and advances.

The benefits the construction of the third bridge has brought

The Atlantic Bridge has introduced numerous positive changes in the country. To understand the extent of these changes, here is a short list.

It has made crossing over The Panama Canal considerably easier

Earlier, Panamanians living in this part of Panama’s Caribbean coast had only two options when crossing the Canal was necessary. The first included using ferries. The other involved single lanes over the canal, which were available only when the locks were closed.

Needless to say, the options at the disposal of Panama residents regarding crossing the canal often caused serious and time-consuming waits. Nothing could speed up the ordinary procedure to cross to the other side. Even medical emergencies were no exception to this rule.

Once the traffic capacity stopped depending on the existing locks, it became unlimited. Suddenly, it was easily achievable to cross to the other side without any difficulties or inconveniences. People eagerly welcome this change. They can travel more easily and do business more efficiently since there are no boundaries or limitations to their movement across Panama. Also, after finding better living conditions and with the help of genuine professionals like those available at evolutionmoving.com, relocations are common and easily conducted in no time. This trend is likely to continue.

Judging by the opinion of an immense number of people in love with traveling, Panama is definitely the place to go to in 2019 if you have had no chance to do that so far. Whether you want to enjoy beautiful beaches, eat delicious food, see fascinating natural beauties or simply experience the exciting nightlife, Panama is the right destination for you. The permanent crossing across the canal on the Atlantic side contributes considerably to the accessibility of all Panamanian areas you are willing to explore. Thrill-seekers, in particular, appreciate this convenience.

Commercial sectors will benefit from the construction of this bridge

We believe there is no need to explain how the construction of this bridge will help the development of commercial sectors in the country. The better the connection between the areas in Panama, the better they can cooperate on various levels. Also, whenever a project is orchestrated and conducted, it offers employment to a significantly high number of people. This all brings a positive and rewarding environment for all Panama residents.

Making a plan for constructing the fourth bridge is in progress

The reputation of the happiest people in the world explains why Panamanians look at advances in their country with great pride and appreciation. Moreover, they are a good, united team which strives heavily to make further improvements. Does it surprise then that there is already a plan to build the fourth bridge over the Panama Canal very soon? Not really. According to the initial points of the plan, the bridge should be closer to Panama City and it is meant to connect the capital with Panama Pacifico and western Panama. A major benefit is an extension of the metro which the bridge will include. We must admit that the wish of Panamanians to further develop their country and improve the living conditions is fascinating.

If you are looking for the ideal place to settle [Read More...]

We all know that Panama is a link between South [Read More...]

The Old Town of Portobelo, Panama

Along the shores of the Caribbean, in Panama’s [Read More...]

Although cryptocurrencies have been around for [Read More...]

Are you thinking about traveling to Panama? This [Read More...]

Investors See The Potential in Pedasi