Home » Articles » A Village in Panama Built from Plastic Bottles

A Village in Panama Built from Plastic Bottles 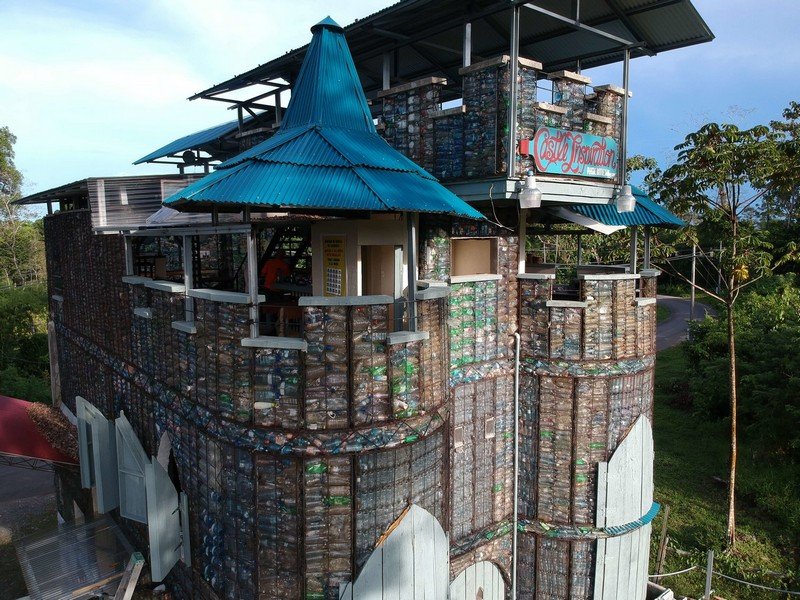 Each year, humankind is producing about 380 million tons of plastic. During the last 70 years, in total, we have produced about 6.3 billion tons of plastic. Approximately 9 percent of that amount was recycled, while 12 percent has been incinerated. That leaves us with a whole lot of plastic that’s still out there, negatively influencing wildlife, humankind, and nature as a whole. Sure, some of that plastic has degraded over time, but plastic is chemically structured in a way that endures natural processes of degradation. Together with the fact that plastics are cheap to make and thus massively produced (especially when we’re talking about plastic bottles), this has contributed to a worldwide plastic pollution. Many people have a problem with that, but one man has decided to do something unexpected about it. Meet Robert Bezeau.

How it all began

After moving from Montreal to the island of Bocas Del Toro, near the Caribbean coast of Panama, Bezeau has noticed how polluted the area is. That’s not surprising because, during the 1990s, this island has seen a large increase in popularity as a tourist destination. This increase was so large, in fact, that the inhabitants of the island simply couldn’t cope with the amount of garbage that was produced.

In 2012, as a part of the Bocas recycling program, Bezeau has collected over one million plastic bottles. Surrounded by so many bottles, Bezeau, an eco-enthusiast, decided to do something useful with them. As you have probably already guessed, he’s building a village out of plastic bottles! So, if you’re traveling to Panama, apart from the locations that we have listed in our travel guide for Panama, be sure to check out the Plastic Bottle Village as well.

A castle & a dungeon

So far, he and other like-minded folks have built a castle called the Castle Inspiration, as well as a dungeon. The idea is to increase awareness about the dangers of plastic pollution. Any money you spend in the village will go towards saving the Earth.

A vacation in jail

For example, you can spend 290 dollars for an “inspiring vacation in jail”, located inside the dungeon. 290 dollars will buy you three nights in jail (including breakfast), and one night in a suite inside Castle Inspiration. You have the key to your cell at all times and you can leave anytime if you’re so inclined.

However, the idea is to repent yourself for your crimes against nature, and to “donate” some money to what is essentially a fund-raising activity. You’ll get a room in a “hotel”, and your 290 dollars will go to a good cause. Two cells with four beds and another four cells with two beds are located inside the Dungeon. Bezeau’s jail is not on our list of best resorts for couples in Panama, but if it fits your idea of romance, you can spend three nights with your significant other in jail, and help to save Mother Earth in the process.

The castle itself has four stories and is 14 meters tall. The first two floors have four guest rooms, there’s a dining area on the third floor, and if you climb all the way to the top, you can enjoy the beautiful view. These four floors were made by using 40.000 plastic bottles. For a price of 90 dollars per day, you’ll get a room with four beds. The village is located in a jungle, but there are hiking trails and other paths that will lead you to the beach and all service is nearby. Apart from these three reasons why you should visit Panama, Bezeau’s plastic village is definitely another alluring reason to visit this country.

But that’s not all! Here are some other structures that Bezeau is planning to build inside of his plastic village:

If you don’t want to spend a few nights in the village, there are other ways that you can help the cause.

The guard & the visitor

For five dollars, you can obtain the title of a guard of the village. Don’t worry, this doesn’t mean that you’ll actually have to guard anything. You’ll rather become a guardian of the Earth. Your five dollars will be used to train people on how to reuse plastic bottles, as well as on how they can build structures out of bottles. After all, one of the goals of this project is to eventually have trained groups of people who will travel across various countries and instruct their residents on what they can do with plastic bottles in order to help save the Earth.

For another five dollars, you’ll obtain the title of a visitor. The visitors will get a guided tour of Castle Inspiration, as well as 25 Carbon footprint stickers. Carbon footprint is the amount of carbon dioxide that is released into the atmosphere by a single person or a group of people. By buying these stickers, you’re helping to atone for your carbon footprint.

What’s more, these stickers are given to native children, who will then apply them to 25 plastic bottles. The kids will then exchange these bottles for food, and the bottles themselves will be returned to Bezeau in order to be used for building.

The archer & the knight

So, if you’re moving to Panama, try to save as much money as possible in order to help the poor children of Panama. You can do that in a number of ways, for example, by hiring a reliable, but cheap moving company. If you live in New York, we know for a fact that one such company is Verrazano Moving, so don’t think twice and ask for assistance when packing your belongings. And if you don’t live in New York, ask around in order to find the right company. You’ll save a lot of money, which you’ll hopefully then use for a good cause such as this one!

Be a part of the solution!

Robert Bezeau’s village made of plastic bottles is still in its early stages. However, he has already done a great service to humanity. Not only is he reusing harmful plastic, but he’s also spreading awareness of the dangers of plastic pollution. And in the process, he’s also found a way to help the poor and starving children. If you can, drop by his village and help out. 50 dollars is not much for most people, but for Bezeau, the native children and the planet Earth – it can mean a great deal.  Find out more details or make a reservation at http://www.plasticbottlevillage-theline.com/

Panama Railway: the magical journey from Panama City to Colon

Once you leave the great Colon city and take [Read More...]

Whether you’re a tourist or looking to [Read More...]