Published by Michael Flora On February 29, 2020 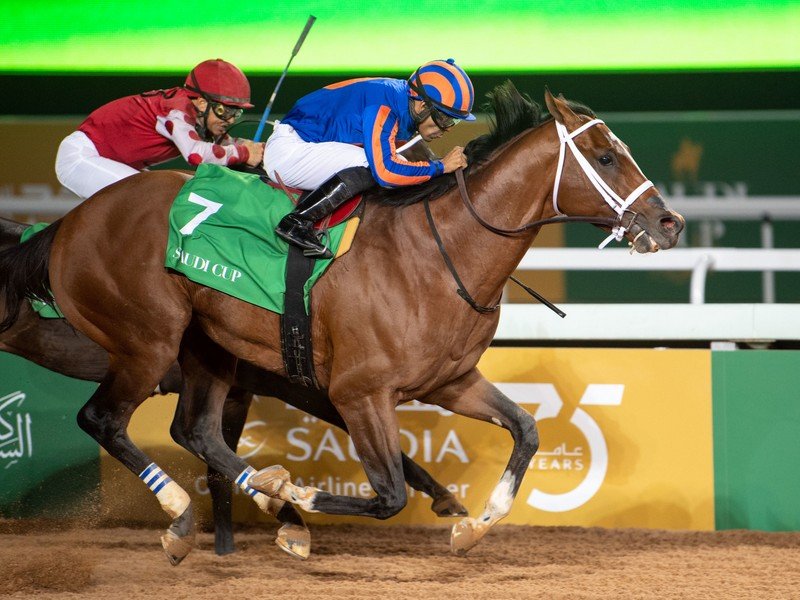 On Saturday, February 29th, 2020, Panamanian American jockey Luis Saez rode Maximum Security to victory in the richest race in Thoroughbred history. After his historic triumph in the Saudi Cup, a victory earned thousands of miles from Saez’s place of birth in Panama, he returned to South Florida on Wednesday.

The Saudi Cup took place in the King Abdulaziz Racetrack, located in Riyadh, the capital of Saudi Arabia. The $20-million race was specifically for thoroughbreds; it was open to four-year-olds and upwards for Northern Hemisphere participants, and three-year-olds and upwards for Southern Hemisphere participants. In total, the 1800m (9f) dirt race was worth US$20m;

with a total of 14 participants. The afternoon and evening also included an under-card of international contests, worth between $500k and $2,5m, both on the new inside turf course and on the dirt track.

Four-year-old Maximum Security offered a stellar performance, running a strong race throughout. Mucho Gusto and jockey Bob Baffert lead most of the race, but ended up being edged out and finishing fourth. In second place came mare Midnight Bisou, a hard-charging contender who finally lost to Maximum Security by a half-length and came second. In third place came Benbatl.

Maximum Security and Midnight Bisou are based in the United States. Third-place Benbatl has mostly raced in Dubai and England, while fourth-place Mucho Gusto is based in Santa Anita.

“This is for you. I love you mama,” Saez said after crossing the finish line. “This is for America, for my family, for my daughter, and all my people, especially for my mother in Panama. And my brother Ron. He is here with me.”

The agents, past and future

Saez and agent Richard DePass have shared a long and prosperous association, having won upwards of $116m in purses and 2,362 total wins. Still, Richard DePass reportedly wished to retire, and thus Saez will work with agent Kiaran McLaughlin – who has served as his trainer over the years – after the conclusion of the Championship Meet.

“[DePass] told me he wanted to retire. We sat at the table, me, him and Kiaran, and we made the decision,” Saez said. “I’m going to miss him a lot,” he added.

He seems to be looking forward to his new association with Kiaran, nonetheless. “I’m so glad, because Kiaran is a man I respect. […] He has treated me so good and given me so much support. Having him as an agent is very special.”

Maximum Security was provided to Saez by trainer Jason Servis; “It was something special for me, all the connections, my family, everybody,” Saez said. “[Pacesetter Mucho Gusto] was running too. For a second, I didn’t know if we could beat him, but in the last jumps, we got there.”

After the race – return to the US

After his victory, Saez returned to South Florida and accepted seven months on Gulfstream Park’s program. “It was amazing”, said Saez, “but I’m so glad to come back and be here”. The 27-year-old Panama native began riding in South Florida in 2009, starting out at Calder Race Track as his home base, and quickly enjoyed notable success.

Outside the race – Panama city

Panama City is the capital of Panama, with an urban population of 880,691 and over 1.5 million people in its metropolitan area. Founded by the Spanish conquistadors in the 16th century, the city was destroyed in a fire in the 17th century to be later rebuilt nearby. The old city remains are now a famous tourist attraction, as well as a World Heritage site. Through the years it has remained a popular destination for both tourism and relocation, for a multitude of reasons. From its history, culture, natural beauty, all the way to practical concerns such as the steady tropical climate and available Panama real estate for sale, the city has much to offer to aspiring visitors and future residents alike.

While on the subject of practical concerns, Panama also offers reliable transportation – a clear improvement over past woes. Panama’s metro began operations in 2014, and in April 2019, Panama Metro Line 2 began commercial service. A notable expansion from its initial service of connecting the north and south of the country, there are plans to expand both metro and tram lines. This development helped decongest the streets somewhat – private vehicle ownership was not a challenge Panama’s infrastructure was prepared to meet before such endeavors. Traffic jams have thus been tackled to a visible extent, through increased usage of busses and taxis on top of the relatively new metro lines.

With an approximate monthly cost of living of $800 to $1,500 (rent excluded), save for more extravagant lifestyles, any option ranging from Panama rentals to purchasing real estate is feasible.  Even including rent costs, Panama is much cheaper to live in than the US; out of the 119 ranked countries, the United States ranks as the 23rd most expensive, while Panama is 60th.

The modest cost of living has thus made Panama a popular relocation destination, even outside the US. While not strictly comparable to the US in terms of volume, this trend can even be traced to the EU and the Middle East. Kuwait is one such example, where trained professionals such as the ones at easymovekw.com cater to the increasing demand for relocation services.

Contrary to some persistent misconceptions, it is perfectly easy and safe to buy Panama property; over a dozen laws have been specifically enacted to protect foreign investors, and foreigners enjoy identical property rights to Panamanians.

Panama offers a multitude of luxury real estate options for purchase, The David Bamboo Villa Mansion being a notable example. Outside of such options, Panama homes and Panama condos can be bought, rented, or even built; a Panamanian-built home usually costs $50 to $56 per square foot. Thus, a 2-bath, 2-bedroom, home of ~1500 square feet will cost roughly $70k to $85k to build.

It is no wonder that Panama is becoming more and [Read More...]

How to Buy Panama Real Estate

Being a beautiful and convenient place to live, [Read More...]

For two years in a row now, Panamanians have been [Read More...]